I've been sewing -- just not clothes. (Lately: holiday gifts, mostly totes.) BUT I wanted to post this, because I'm kind of in love with this project, and the book it came from. 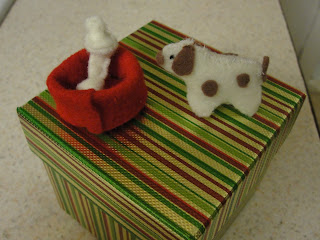 It's from Microcrafts, which is mostly about hand-sewing teeny-tiny itty-bitty cute things: monster babies, cats, dogs, owls, you name it. I picked it up on impulse from the library and renewed it until they wouldn't let me renew it anymore, and I'm ashamed to say it's currently two weeks overdue. Whoops. My friend Liz, who was visiting at the time, squeed like crazy over the tiny dog, so I decided to make it and a couple of dog-cessories for her for Christmas.

And then I spent a bunch of weeks making repeat trips to Michael's and picking out different colors of felt and generally putting things off. I don't exactly have amazing hand-sewing skills, as you can probably tell, and the thing about the dog is that you have to use a whipstitch. Visible stitches. EEK.

I made an experimental first dog with heavy white quilting thread, which turned out to be way too heavy. I used all-purpose thread for the second dog and tried to make the whipstitches as tiny as possible. It's still not as pretty as the one in the book, so I guess I'll have to just keep making them until they're perfect. (Ahem.)

But I sent this one off to Liz. I miss him already. I need an army of mini-dogs for my cubicle, and the kitchen windowsill, and the top of the cabinet...

Did it look like the photo/drawing on the pattern envelope once you were done sewing with it?

More or less, I guess

Mostly, but the author's written instructions weren't always clear. For example, she doesn't always specify the type of stitches you need, and the bone instructions just said to fold the piece of felt in half, but didn't specify which way. It's not hard to figure things out from the photos, though.


What did you particularly like or dislike about the pattern?

Also, it's pretty instant gratification -- it only takes a couple of hours to finish one of these guys. Probably less, if you're a fast hand-sewer.


Pattern alterations or any design changes you made:

I used No-Sew glue to attach the spots, the nose, and the tail. (The book says to whipstitch them, but I tried and it looked pretty awful.) I used a toothpick to add black fabric paint for the eyes, instead of embroidering them on.

The book tells you to embroider an upside-down Y for the mouth, but I didn't see a mouth on the dog in the photo, oddly enough. I left it out.

For the bowl, I had a hard time figuring out the written instructions. I wound up whipstitching the bottom to the side, sewing the short side, and then flipping the top down.

Would you sew it again? Would you recommend it to others?
Oh yeah, I'm already planning more. I'd like to make a kitty, too -- maybe a mini-version of Harley, my intrepid sewing assistant.