I had a fantastic time at MPB Day. It was so much fun (and so great to meet other sewists and geek out on fabric the entire day -- whee!)

I got in late Friday night and stayed in my favorite cheapie hotel, the Carlton Arms. (I would've stayed at the Gershwin, but it's under new management and I think they're going more upscale, bah.) It's old, and creaky, and every room is painted by a different artist.

A couple of scenes from my walls: 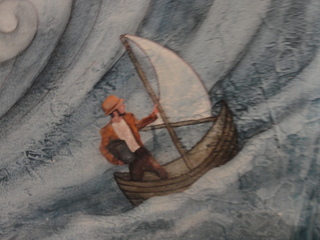 Also, they have cats. The cat last time was old and grumpy and slept in the lobby a lot. The cat this time was a four-month-old EMERGENCYKITTEN who decided it needed to explore my room the second I opened the door.


The next morning, some of us met up early at the Chelsea flea market. Peter has a nice group photo of us, which I hope he doesn't mind if I borrow.


At one point, I saw an Issey Miyake skirt and pounced. (I have, let's say, a minor obsession with Issey Miyake and am bound and determined to make up a Vogue pattern someday.)

"It's Issey!" I said, and Teri (not pictured) came with me to take a second look.

"But the pleating!" I said.

And that was that.

I should also mention that everyone's handmade clothing was amazing. Suzanne (right) made her dress from a Grainline Studios pattern, and the skirt Vicki (far left) wore, which I'm pretty sure was handmade, although I didn't ask her, was ivory linen with black ribbons and buttons. It was a beautiful thing.

We moved to another location across the street and did not buy the Christmas fabric.

Then we walked up the street and gathered by the FIT museum. There were a lot of us. Peter handed out a (great and I'm keeping it forever) guide to the Garment District.

The exhibit was also amazing. It was just one gallery, but it took us a good hour to go through it. I loved the Paco Rabanne chain mail dress (can't find a picture, sadly).

Then we went to Panera and noshed and pattern- and fabric-swapped. I scored two or three yards of stretch denim -- I see experimental jeans-making in my future!

Then it was fabric-shopping time. I accidentally lost my group (I didn't see them, assumed they'd left, ran to catch up, and couldn't find them -- whoops), but ran into various smaller groups along the way.

I saw but did not go into Spandex World.

I visited the kitties at Daytona Trim.

I went to Mood and saw Suzanne and some others from the group as I was exiting the elevator. I walked up and said, "Hey!"

I turned around, and lo, there was Uli from Project Runway, who had been STANDING RIGHT BEHIND ME IN THE ELEVATOR and I missed it. (No picture. Sadpants.)

And then I went to Paron's WHICH WAS AMAZING and I blew most of my fabric budget right there, mostly on two cuts of Italian stretch wool for a top-secret project.

(Okay, and yes, I'll probably never make it up and just pull out the fabric occasionally to pet it and cry.)


"What are you going to make?" said the guy at Mood, when he was cutting the striped cotton.

"I think you should make pajamas. Little pajama shorts with elastic!"

Good idea. Also, I'm thinking of using some for the sleeves on this Katherine Tilton jacket. And this ribbon. Y/N? 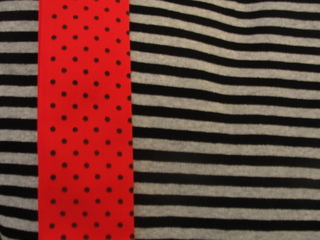 Also, very important score: SQUIRREL THINGS. Not buttons. I'm not sure what they are, but they're going on something.

And here's the pattern haul from the swap.


After shopping, I ran to meet everyone in Bryant Park, but the park was packed and I couldn't find them. Note to self: Next time, do not leave lunch early!

All that to say: I had such a great time, and I can't thank Peter enough for organizing it. I'm already looking forward to next year.