We were already planning to go to NY over Memorial Day weekend, mostly to visit some old haunts that were closing (you'll be missed, Pearl River Mart and Salvor Kiosk). Then I found out that Natalie Chanin was hosting two sewing workshops and a book signing...on Thursday, two days before we were supposed to leave. So I exchanged my train tickets and found a hotel and arranged to work remotely for two days. I mean, what else could I do?

The workshop was held at LF8, a nifty boutique in the East Village. 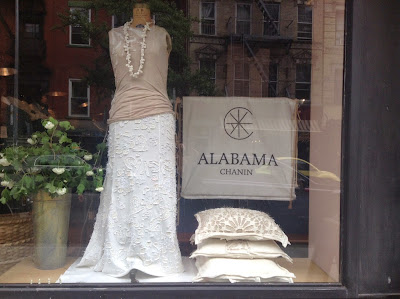 There's not much you can do in two hours (and we didn't sew much, just a bit in the end), but it was a great introduction to AC materials and methods. Natalie talked about the physics of sewing, the properties of various textiles (did you know that silk from silkworms is perfectly triangular? I didn't), and the basics of hand-sewing. We practiced stitching on swatches and she walked us through the process of reverse appliquéing the projects in our DIY kits, included with the workshop.

(I got the A. Chanin v-neck t-shirt, and let me tell you, it's the softest thing ever. I never want to take it off.)

I loved having the chance to ask questions, and I loved her anti-perfectionism rants. ("Sometimes, when I look down at the skirt I'm wearing, I'll see a stitch I messed up and say, 'Hello, old friend.'") It's a nice change from Absolute Perfection Copyeditorland, where I currently spend most of my time. I will screw up garments! And that's OK!

Also, she had a bunch of test swatches on hand, so you could see the various techniques close-up. They also had several AC garments for sale, including this jacket, which kept calling to me from across the room. (Pardon the glare; there was a bright light right over the rack.) 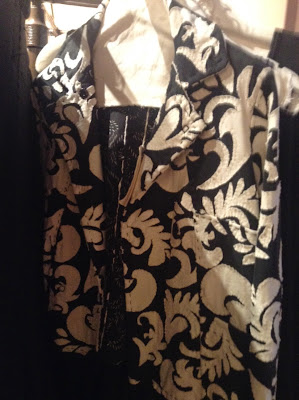 Let me tell you, that thing was heavy-duty. It felt like it was made to last decades.

I also fell in love with this blazer with a double collar, appliqué, and ruffles. 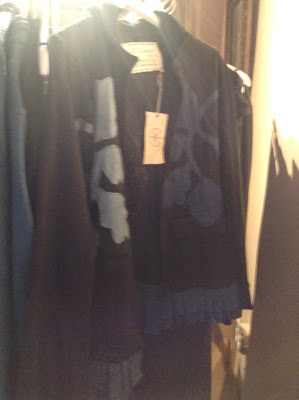 I will attempt to make that at some point, someday, in my dreams.

Aside from that, I spent the weekend doing epic amounts of walking, shopping, and eating (SO MUCH GOOD FOOD—I had a $12 egg sandwich and didn't even mind; it was delicious). Visited Salvor Kiosk one last time, since they're closing in July. 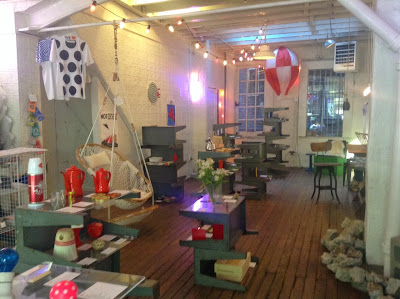 Of all the random little boutiques in New York, this is my favorite. It carries anonymously designed practical things from different countries, like grocery bags from Germany and metal clips from Japan. I bought a small Japanese carpenter's knife and I regret nothing.

One more Alabama thing: I spent the train ride back practicing various stitches and stuff on my swatch, and decided to go with outside reverse appliqué for the next project. (And, yes, I ordered more fabric when I got home. I regret nothing.)