We (Peter, my husband Tom, Lisa, James, Kate, and a few others) met at Blue Dog Coffee in the morning. I love their iced coffee, but the dude forgot our orders! Also I don't have a picture of Lisa's dress this year. Sad. 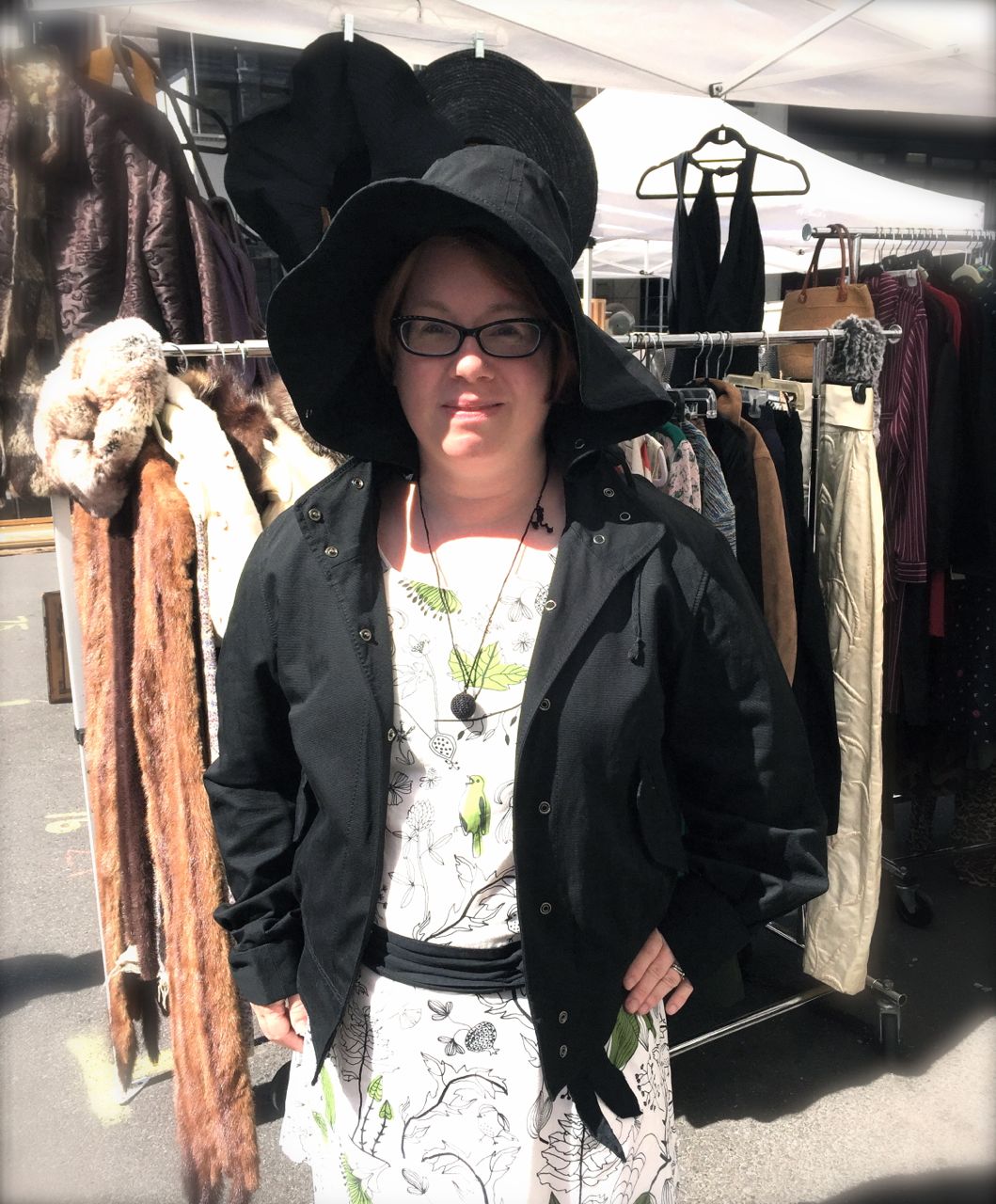 Full disclosure: I've been fascinated with Hussein Chalayan since I saw this article. It makes me want to get the basics down so I can make excellent modular clothing. He's amazing. (Did I already say that? I did. Well, there you go.)

I'm also totally enamored with this jacket because it's practical for New England weather. I can totally wear it to Old Sturbridge Village when it's chilly but sunny and flip the hat up. Or take it on the ferry. Win!


Also, here's Peter and Enrique of Enrique Sews with their me-mades. I can't get over Enrique's tie and shirt! And Peter's polo! I'm so impressed with their shirtmaking skills, seriously. One of these days... 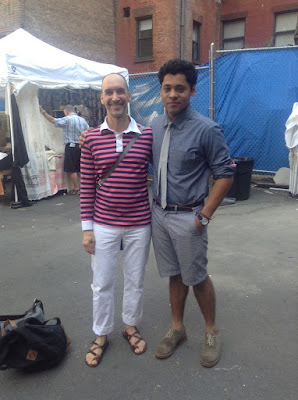 Then we went to the FIT museum. Here's Peter (with arm extended) welcoming everyone: 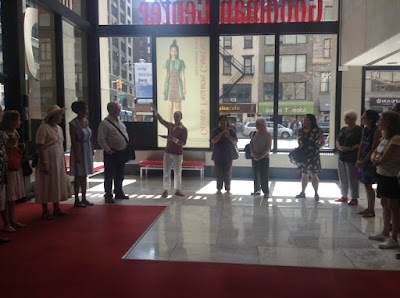 There was an exhibit on global fashion and I freaked out at the Belgians. Again.

I freaked out especially at the A.F. Vandevorst (the one on the right) and the drape (or lack of it) constructed partly out of wire. Dang.

(Another full disclosure: When I was between work gigs a couple of years ago, I went to Antwerp, mostly for the fashion—okay, and the waffles and chocolate and beer—and it was amazing. I'll post pictures one of these days.)

Also I was impressed with this, from the South Korean section. 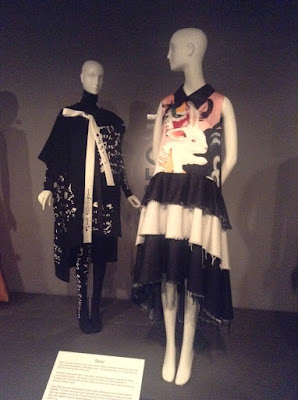 Especially the one on the left. (I need to look up the designer.) The cohesiveness of the entire outfit. Those tights!

Then we went to Panera for lunch. Where I admired James's (of Craft Space Continuum's) bag made out of a dog food bag: 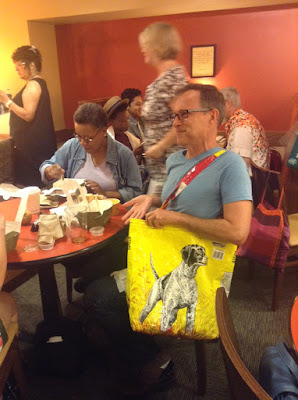 Close-up (I love the placement): 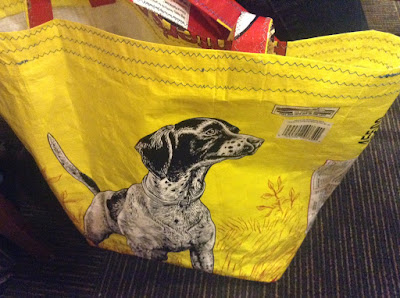 And I acquired a shitload of patterns: 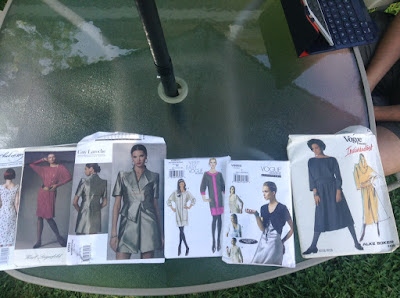 I especially loved the one on the right, a Vogue Individualist pattern, which is very '80s and voluminous in its original incarnation. But I love the cowl neck and the seamed belt. I spent the bus ride home trying to figure out how to work the cowl neck into a standalone top. 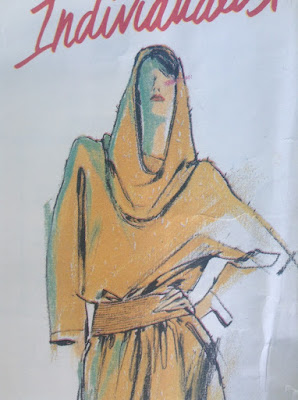 And then we went fabric shopping. I was a little sad because I blew most of my fabric shopping budget on the Hussein Chalayan jacket (totally worth it, though). But as it turned out, Paron's had a free remnant bin! 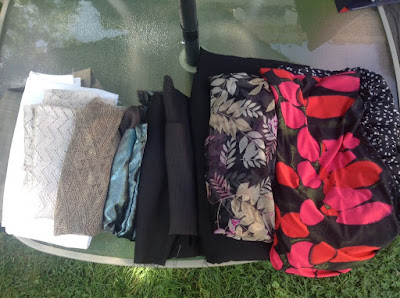 Everything except the fabric on the very far left was in the free bin! Most of it was half a yard or more. L to R: linen silk (which I stalked at Paron's last year on MPB Day), white linen, glittery lace, printed silk, green velvet, black poly (3 yards, or enough for at least one dress), two pieces of wool suiting, another silk print, and a poly print (two full panels, and I'm in love with the print).

For the printed silk, I'm thinking M6926. They're just about the right size to pair with a lace yoke. (I'm working on a M6926 now and wanted to have it done in time for MPB Day but I ran out of time.)

At Mood, I looked at, but did not buy, this neoprene: 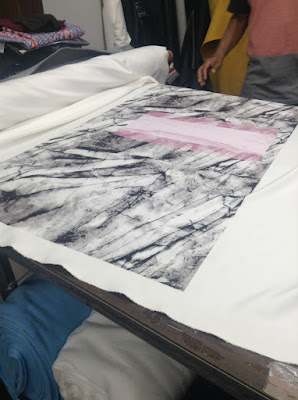 I love the print, but it's a fairly small panel with a lot of white in between. I had interesting conversations with MPBers and a Mood staffer about possible ways of working with it (block it with  white, block it with black, etc.) but decided to hold off for now. I might still buy it online.

I also gawked at the pink donut neoprene, which I've been stalking online for like the last month— as well as this floral neoprene. Supposedly neoprene is on the way out (that's what Harper's Bazaar said, anyway), but I refuse to believe it.

Also I met a lot of lovely people and should have exchanged contact information! (If we met, please feel free to leave yours!)

On Sunday, Tom and I went to Bloomingdale's, because when we lived in NY, I worked part-time in the girls' department back when I was trying to make it in the extremely glamorous world of freelance copyediting.

Not much has changed (on the girls' floor, anyway). 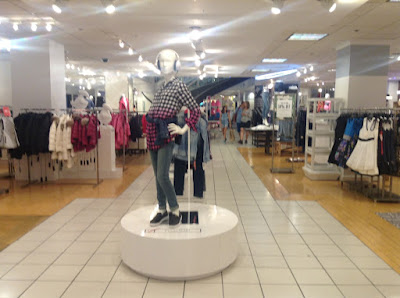 Also, there's now a Magnolia Bakery outpost on the first floor, which is exciting.

We also ate a lot at the Japanese deli around the corner from our hotel. (No pictures, sadly.) I don't miss a lot about NY, but I sure do miss the food and the shopping.

So that's it. I have to thank Peter for being such a fantastic host -- I look forward to MPB every year and it's so much fun. Thanks, Peter!