I was surprised by the black-eyed Susans; you can't really tell from the photo (bad light, I guess), but they produced a fairly dark range of purple-greys. I totally expected them to make the usual yellows and oranges. I really like the results, especially the Alabama Chanin cotton jersey at bottom right. (All I want for Christmas, Santa, is a billion yards of white Alabama Chanin fabric.)

Also, I used the goldenrod to dye the base fabric for an experimental pillowcase: 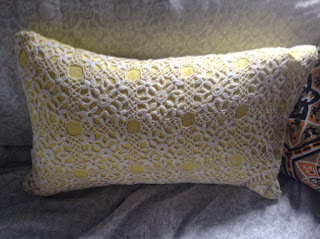 Overnight soak on linen, no mordant. I made this for The Chalifour Collection at the Pickering Wharf antiques market in Salem, along with a few other pieces. (The back story on that: I was out yard-saling on my bike one Saturday morning—as one does—when the proprietor saw me looking at sewing stuff and said she was trying to find someone to redesign some vintage linens for her antiques booth. After a lot of hemming and hawing, I decided to give it a shot—although I still feel like I'm in beginner territory as far as sewing goes!)

Anyway, the pillow above was made from two white linen napkins and a crocheted placemat. I'm actually really enjoying the process—some of the linens are hand-embroidered and really beautiful, dating from the '30s, '40s, and '50s, I'd guess. It's been fun trying to puzzle out what to do for each piece.

Update two: I AM making clothes. I swear. I got sidetracked by dyeing and pillow-making, but I have, like, four UFOs that just need finishing up.

Update three: Harley the cat had surgery and is now in possession of a glamorous new accessory: 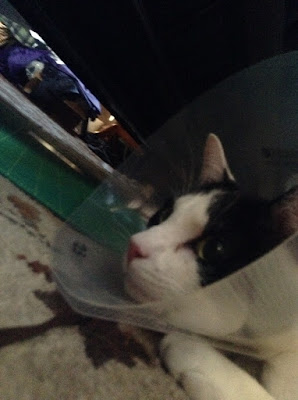 He doesn't much care for it. I can't understand why. It's very Gareth Pugh.

(Did you know that those things are called Elizabethan collars? I had no idea.)

Email ThisBlogThis!Share to TwitterShare to FacebookShare to Pinterest
Labels: dyeing