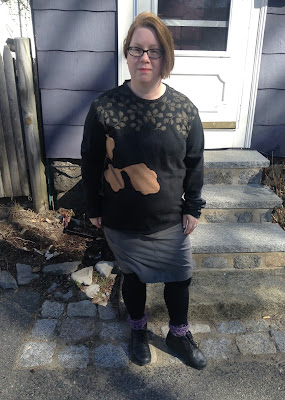 This is Alabama Chanin's DIY Verd Unisex T-shirt kit in size large which my awesome husband gifted me for Christmas. I fell in love with the design as soon as I saw it on their website, and visited that page an embarrassing number of times over several months. When my husband said, "What do you want for Christmas?"  and told me to update my Amazon wish list, I put it up, then took it down, put it up, took it down, put it up, took it down....because it was expensive and definitely fell under the Big Present category for us.

Finally I took it down. But by then, he'd already seen it and ordered it. He's the best.

So! Here's what you need to know if you're interested in ordering this kit: 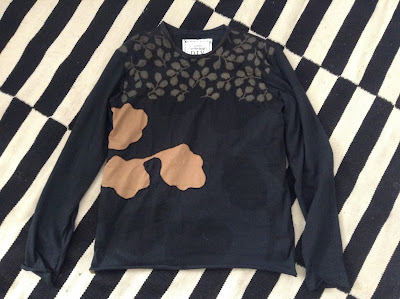 1. It's worth the price. The pieces are perfectly -- and I mean perfectly -- cut and stenciled, no mean feat given the placement of the large stencil next to the small. (For what it's worth, I think Natalie's experiments with scale are so interesting.) The shirt I got looked exactly like the shirt on the site. 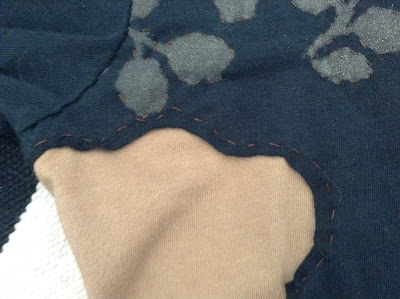 2. The finished shirt feels incredibly sturdy, like it'll last years and years. It's also soft and comfortable and fairly heavy -- it feels like a lightweight sweatshirt when it's on.

3. It's a relatively quick sew for an AC project; it look me two months but could have taken much less, if I hadn't worked on it in and around other projects. I basically outlined the small leaves with the Brunette embroidery floss, reverse appliqued three of the larger leaves, and then constructed the shirt. I think it would also look cute without the reverse applique or any embellishment, constructed as is.

For what it's worth, I don't think you can do outside reverse applique on the large leaves (= cutting away all of the paint), because they're placed so close to the small ones. (See photo above.)

Also, cutting away the top fabric on the large leaves is SO SCARY. It's like, for a smaller-sized stencil, if you screw up one shape, it's no big deal, but if you screw up a huge one...well. Whoops. 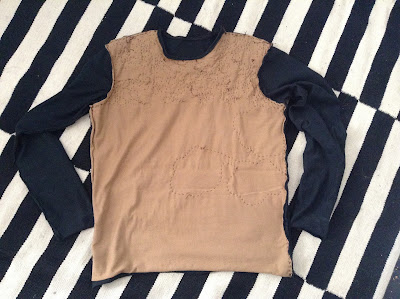 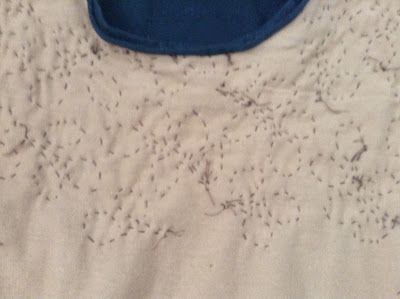 I ddi two rows of straight stitches at the shoulder, sleeves, and sides (second row right next to the first row) to make sure everything was totally secure.

4. The instructions are minimal (it's basically AC's standard one-sheet for all projects, so just includes info on loving your thread, knotting off, basic stitches, order of construction, and binding). It's meant to just be a reference sheet, and it recommends using an AC book. I think that's probably a good idea.

5. I was also really confused by their Cretan stitch diagram (but I'm terrible with diagrams most of the time, so that's no surprise) and wound up using this tutorial instead.

(I'm not completely thrilled with the way my Cretan stitch came out, but it looks relatively even across the neckband, so I guess I'll keep it.)

6. I had a really hard time distinguishing the large leaves, which were spray-painted black, from the black fabric. (Easy to see from far away, but harder close up, if that makes any sense.) I wound up chalking around the shapes and using a task light (this $5 task light from IKEA, which plugs into any USB port, is basically the best thing ever), and that helped a lot.

7. Sewing on the little Alabama Chanin label at the end is SO SATISFYING. 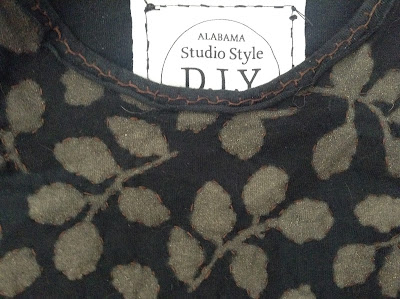 I kind of loved everything about this project. It was fun. And I really love the finished shirt and plan on wearing it for years and years.

I'm also pretty well sold on their DIY kits now too. Already saving my pennies and nickels and dimes for the next one. :)
Posted by Tracy at 1:37 PM