I went to the Original Sewing and Quilt Expo in Worcester over the weekend. I posted a short review over at PatternReview, but thought I'd post some pictures here.

This is the third year I've gone, and I really enjoyed it again -- although it seems to be getting smaller and smaller every year. There seemed to be fewer vendors this year (and definitely fewer non-quilting fabric vendors). I'm a little worried about it, actually. Stay with us, Worcester expo!

Lisa came up for the first day, and we took a couple of classes together. She bought fabric from a guy with the most amazing sequined jacket I've ever seen. 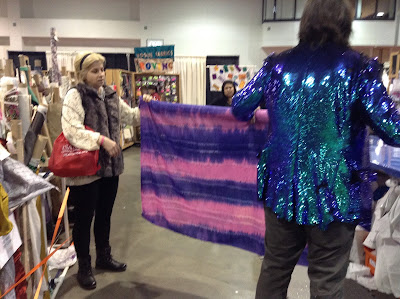 Wait wait, here's the guy (he posed for me). 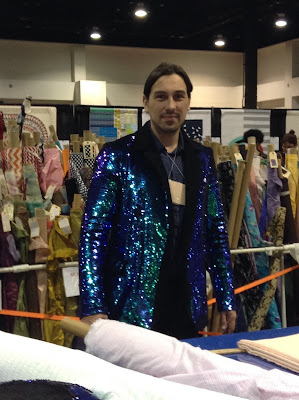 They were selling the fabric -- a reversible sequined knit. You could change the color by just dragging a finger across it. It was glorious. The Vogue Fabrics employees had a lot of fun playing with it. 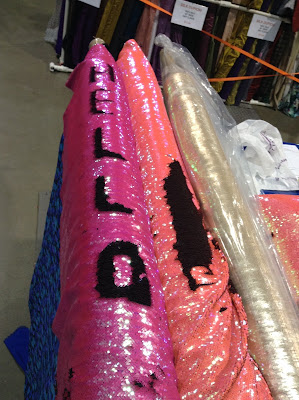 I have to say, shopping at Vogue made me a little homesick. I miss Chicago.

And I, er, did some shopping. I didn't intend to -- I went in going, "Heck, I don't really need anything except zippers! And we're going to the Netherlands next month! I'm not spending any money! Not a dime! Just zippers, if I find good ones!"

Then I met Cynthia Guffey. Took both of her zipper classes on day 2, and then went to her fashion show, and the more I examined her clothes, the more I fell in love with her aesthetic, and that was it for me. I walked out with five patterns. FIVE.

(Says the person who's currently trying to de-stash on Etsy. I know, I know.)

The second zipper class was pretty amazing. Can't remember the full title, but it was on unusual zipper placement, and she really had some amazing ideas. For example, this dress: 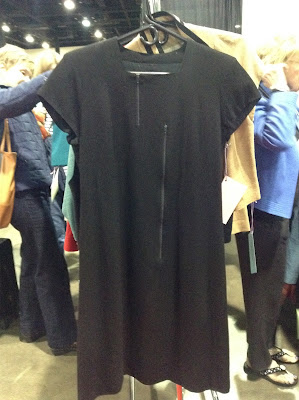 Not the greatest picture, I know (I'm just about ready to give up on my iPod for picture-taking), but you'll see a six-inch zipper on the left and a 16-inch zipper on the right, placed equidistant from the center, and the second one is designed to start where the first one ends. The whole look was sort of futuristic and modern. I liked it a lot.

Also, bonus: She pointed out that if you put the zippers on the front instead of the back, you'll never need help with a back zipper again. 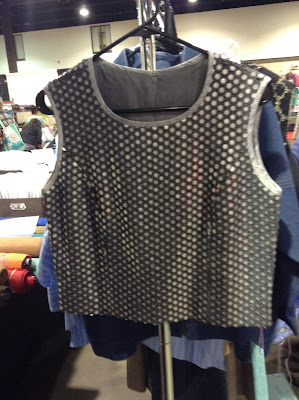 I couldn't stop squeeing over her choice of fabrics. (She had bolts of very nice Indian raw silk for sale, which she used to make most of the garments.) Everything was lined and incredibly well made. 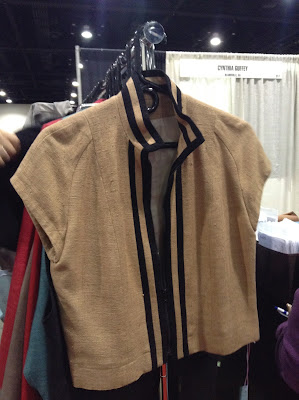 Here it is on a model at the fashion show, pardon the blurriness: 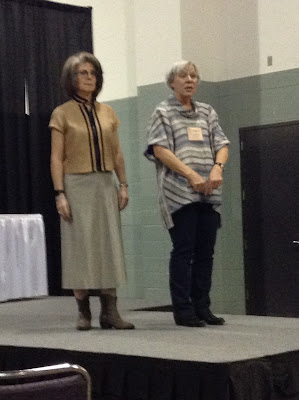 How cute would that be over a sleeveless dress?

That's Cynthia on the right. During the first zipper class, I asked her if I could get a shot of her shirt.

At the fashion show, she showed another version of that same pattern...cropped with a hi-low hem and cuffs. Here they are side by side. 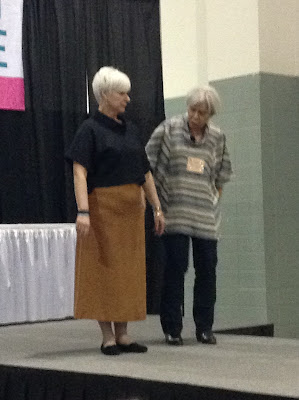 Same shirt! Both super, super cute. From the back: 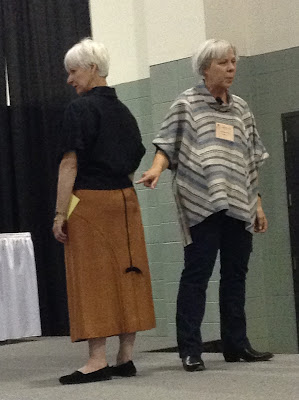 During the fashion show, she asked me and some other audience members to try on various versions of the same jacket. She'd shortened mine about 4 inches, she said, and took 8 inches out of the circumference. I liked it so much that I didn't want to take it off. 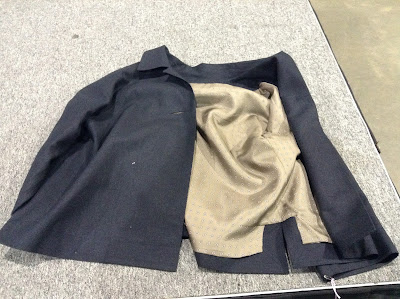 Cynthia herself was a little grumpy and also very funny. During the fashion show, she was complaining about someone's color choices, and someone in the audience said, "Well, that's not very nice," and Cynthia said, "I'm not here to be nice! This is your daughter's wedding! This is the second wife coming to visit!"

Heh. So anyway, I'm really looking forward to trying out her patterns...once I find the right fabric, that is.

In other expo news, I finally got fitted for a custom pants pattern by Kathy Ruddy! V. excited about that, because 1) people swear by her custom pants patterns, 2) I've been wanting to learn how to make pants forever, and 3) it'll take for-freaking-ever to figure out how to alter a commercial pattern. Bonus: She had a bootcut option!

The process was...interesting, though. Kathy Ruddy's comments as she fitted me:

And one other thing I won't mention, because you don't want to know.

Man, this is a long-ass post. I'll stop here, but long story short: Loved it, would go again, hope it doesn't go away.