Once upon a time, I had a really long commute. 3-4 hours a day on the train, longer in the wintertime.

Luckily, I also had a copy of Alabama Studio Sewing + Design: A Guide to Hand-Sewing an Alabama Chanin Wardrobe and a used Bloomers stencil and fabric scraps from one of AC's online garage sales.

I started the Short Fitted Skirt in January and finished it in late April. 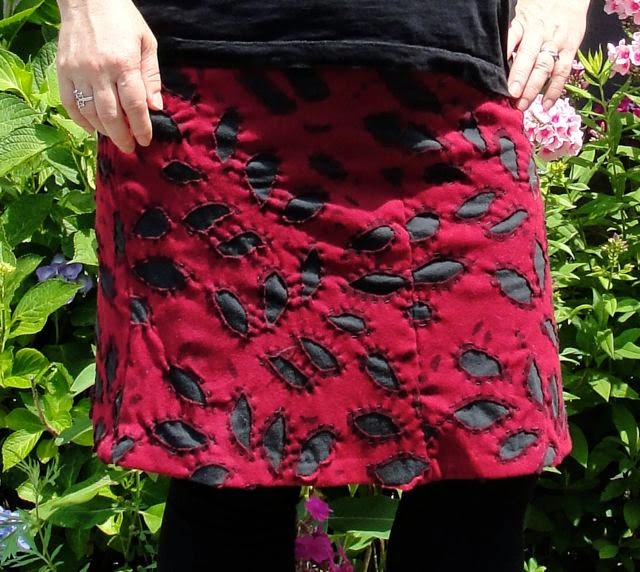 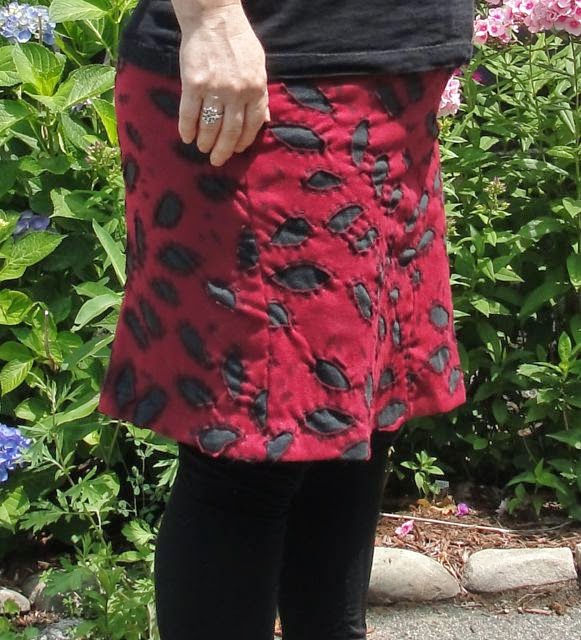 I decided to go with reverse appliqué and keep the knots on the inside. I used AC's organic medium-weight cotton jersey in red for the top layer (it's darker than it looks in the pic), AC's organic medium-weight cotton jersey in black for the bottom, Tulip fabric spray paint in Asphalt for the design, black craft thread to outline the shapes, and black fold-over elastic for the waistline.

This is a size small, believe it or not, which was still way too big -- I had to take in each side by a half-inch or so before sewing on the FOE. (Partly because the fabric was incredibly stretchy compared to the jersey bedsheet I used as a muslin.) 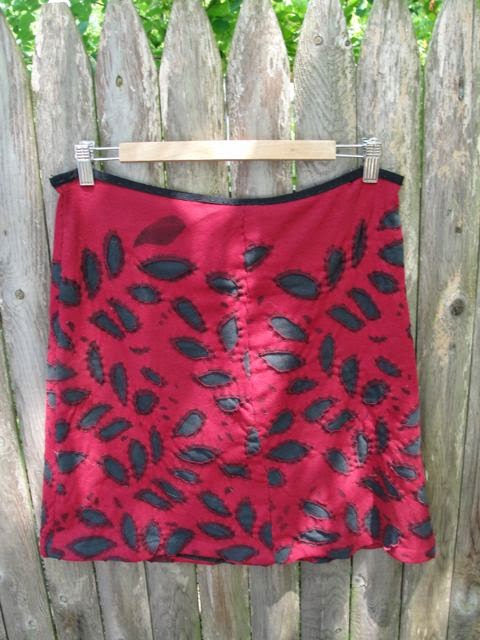 Here's the inside -- as you can see, I didn't have quite enough black fabric, so I left a few shapes uncut at the top, figuring that they'd be covered up most of the time anyway: 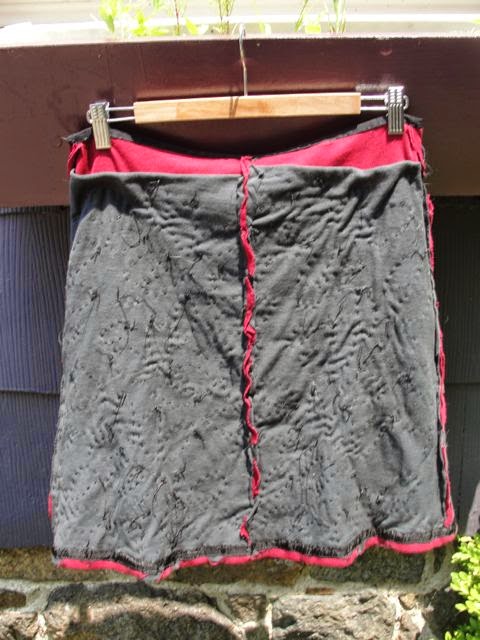 A closeup of the design (I swear, the bottom layer is really black): 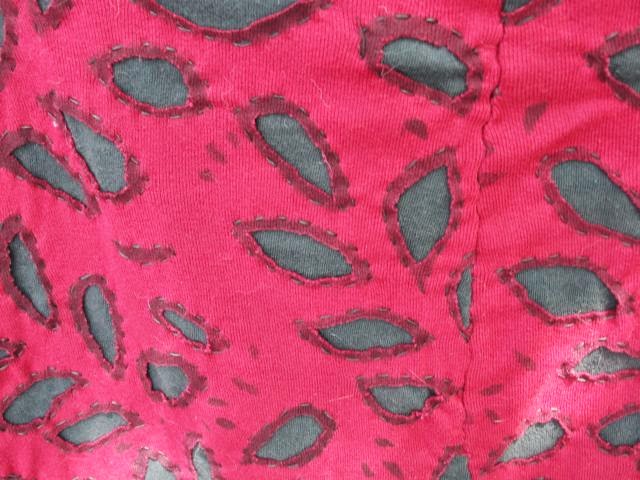 A closeup of the reverse (again with the color -- dang, I need a new camera): 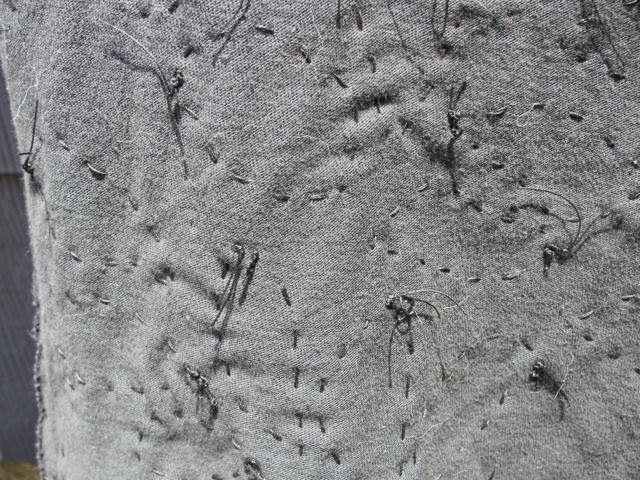 AC says to leave the hem raw, but I decided to have it finished, thinking I could wear it to work someday. (Ha.)

Some thoughts:
After I finished the red skirt, I made a second one out of one layer of AC medium-weight teal cotton jersey. I used black FOE, black craft thread, and flat-felled the seams. Here it is on me: 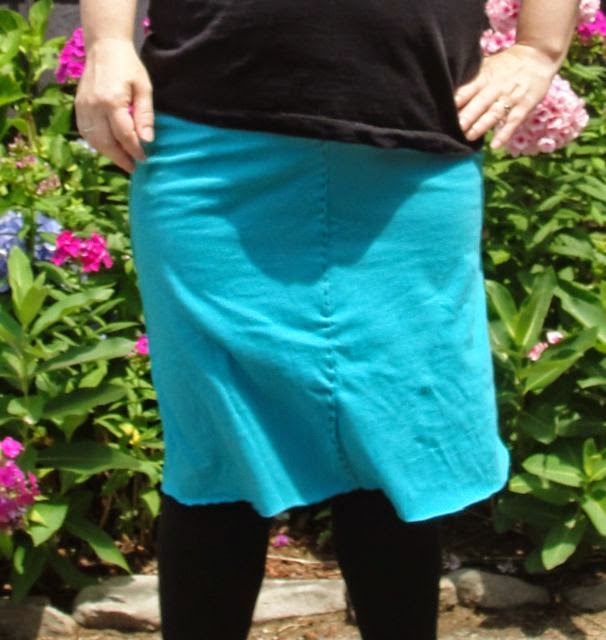 And here's a close-up of the flat-felled seams on the reverse: 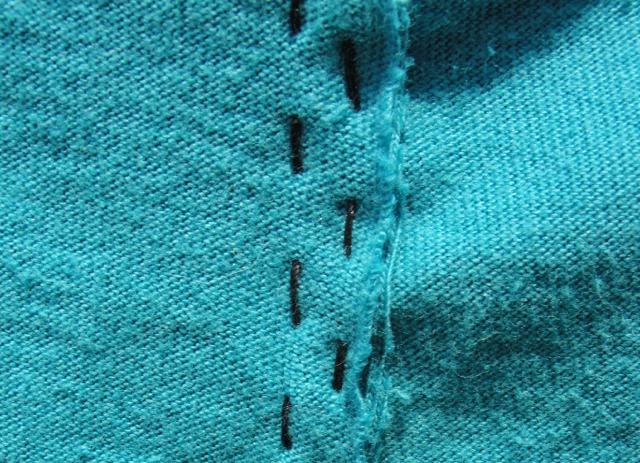 Compared to the red skirt, this was a piece of cake. I think it took, oh, three nights. Maybe two. Hooray for almost-instant gratification.

So that's the news. I'm playing around with other AC patterns (currently trying to extend the t-shirt into a dress; we'll see), and I'll post them here when they're done.
Posted by Tracy at 2:34 PM