I went to the PR meetup at Fabric Place Basement in Natick on Saturday. I met Deepika and some other lovely PRers. It was great!

Janice, the manager, even showed us around the back room. 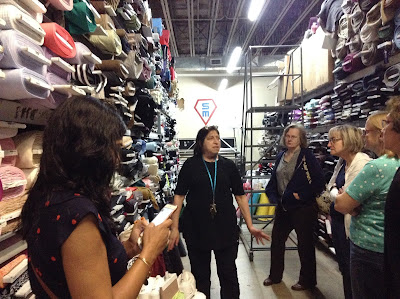 Deepika (on the left) was wearing a Deer & Doe dress with fabric purchased during the last meetup. Jenny (I'm not sure who she is on PR) showed us her shoemaking process, too. I'm inspired to try making some espadrilles at some point. Hmm, I do have some Donkey Kong cotton from JoAnn...

Here's Jenny and someone whose name I didn't catch playing around in the button bin.

I also met someone who's working on the same Cynthia Guffey jacket pattern I am. She was also at the sewing expo in Worcester. How funny.

I bought some linen and a couple of zippers for the jacket. Should be just about ready to go. Woohoo!

Anyway, so. It was fun and I'm definitely going to try and make the next one if I can.

In other news, it looks like I probably won't be able to make it to MPB Day this year. Harley had his surgery, but unfortunately, it looks like the cancer might have spread. (Or has the potential to spread; I'm not really sure -- either way, it was outside the margins of what they got.) We'll know more after his kitty oncologist appointment in July.

In the meantime, I'm trying to spend as much time with him as I can, and flinging open all the windows whenever possible, and giving him all the treats. 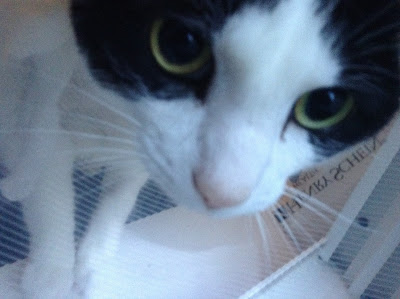 I'm doing a lot of Alabama Chanin hand-sewing in his recovery room. He seems to like the "loving your thread" part. He's such a good little guy.