It's been a while. I haven't really been sewing as much, although that Sandra Betzina dress is still in progress and I'm thinking about a couple of projects.

But a couple of things!

First thing: I went to the Women & Textiles Expo in Lowell yesterday and met up with Deepika and a few others from PatternReview.

It was really fun! I think it's the first year for the expo, and I hope they do it again next year. There were lectures, a makers' table (we made scarves out of cotton and fleece strips), vendors, and a fashion show.

Here's Deepika trying on a jacket from B. Felt: 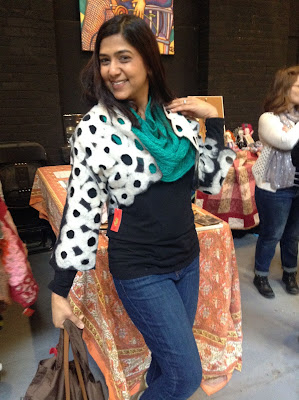 She bought the blue scarf from them:

The fashion show was pretty amazing. Here's what won Best in Show: 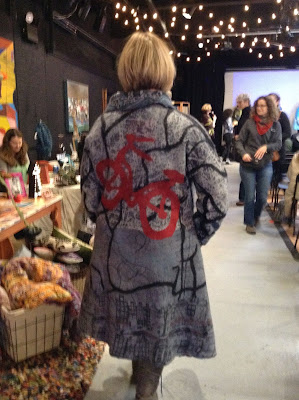 Why yes, that is a reversible coat with a map of Amsterdam made out of felted organic merino wool, no big.

I bought an amazing red woven scarf (you can just see it in the top photo) from Elizabeth Springett: 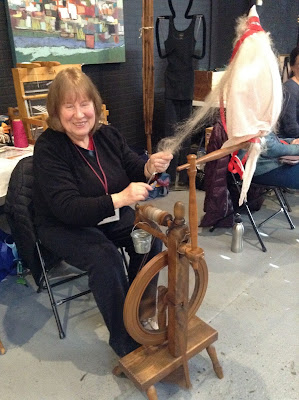 Her friend, who has cerebral palsy and is in a wheelchair, made it. She uses just one finger to move the shuttle. Gorgeous work.

So yeah, fun day. It's filling the Worcester Sew Expo-shaped void in my heart. (But I'll still miss you, Cynthia Guffey.)

The shelter named him Rensselaer, and we've been calling him Ren or Rennie or Captain Rensselaer Sassypants or (suggested by Facebook) Snake Plissken or Nick Furry. The non-working tiny eye on the left is a birth defect, but he sees pretty well out of the right. He's super-pouncy and snuggly and fun, and he likes pizza, vegan yogurt, and hemp milk a lot. (Ask me how I know.)

That's the news for now!